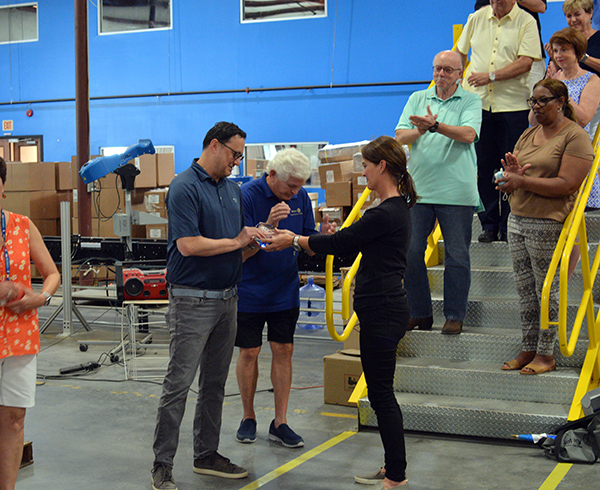 On June 24, 2021, President and Owner of a2b Fulfillment, Ayal Latz was presented with Rotary International’s Excellence in Service to Humanity Award. Each year, the award is given to less than 150 individuals across the globe.

Tina Fischlin, District Governor for Rotary, who nominated Latz, presented him with the award at a2b’s headquarters in Greensboro, amongst staff, family and friends.

Fischlin first connected with Latz in 2010 while working with Second Harvest, Inc., a signature project of the Rotary Club of Greene and Putnam Counties with a mission to help eliminate hunger within the counties they represent. Latz provided warehouse space to store food to be distributed as well as labor and equipment to facilitate the distribution itself.

“Without his assistance, our early effort at distributing food to those in need would have been unsuccessful and Second Harvest would probably not exist today,” explained Fischlin.

Fast forward ten years and 1.75 million pounds of food distributed later, Second Harvest found themselves navigating in a pandemic. Challenges to the distribution were plentiful, including a reduction of volunteers due to safety concerns and the loss of the distribution site itself at the local school facility.

“So, who did we turn to in our time of need?” says Fischlin. “It was Ayal Latz. Just as he did ten years prior, he again offered to help us in any way he could so that we could continue our mission of feeding the hungry in our community. Over the past 12 months, Ayal and his management team at a2b have supported Second Harvest by receiving and storing the donated food, then boxing the food into family-sized assortments and finally hosting the distribution from their facility’s parking lot. Distribution sizes have varied over the past year but serve approximately 150 families each month.”

In addition to support of Second Harvest, Fischlin also spoke about the Latz family’s involvement with the Pete Nance Boys and Girls Club of Greene County, GA, including their recent financial commitment to the club’s new, state-of-the art Facility that opened in the summer of 2021.

Upon accepting the award, Latz said “I don’t really feel like I deserve this, because what we did is easy for us to do. We’re geared for distribution. Whenever we’re packing those food boxes, that’s a pleasure for us. It feels good to be able to use our skillset to support such an important cause right here in our community.”

Rotary is a global network of 1.2 million neighbors, friends, leaders, and problem-solvers who see a world where people unite and take action to create lasting change – across the globe, in our communities, and in ourselves. The Excellence in Service to Humanity Award recognizes non-Rotarians, including partners and spouses of Rotarians, who have demonstrated exemplary humanitarian service in accord with Rotary’s ideals.